Born in Québec province, Canada, Lorraine P. Dietrich received a Bachelor's Degree in Fine Arts Teaching from Université du Québec à Montréal (1975) and has been drawing and painting with transparent watercolours since 1988. The public appreciates the serenity of her paintings, whose dynamic, yet romantic compositions are based on observational drawings and combined with glowing and permanent colours on high quality papers. Flowers are her main inspiration because of their diversity, sensuousness and symbolism often related to the blossoming of life. She also paints still life subjects.
Her paintings have been exhibited in many countries and have won awards from eminent jurys in Canada and other countries. In 2012, she won the Grand Prize in Painting from Canadian Brushstrokes Magazine. In 2012, she was awarded Best Floral Realism and other awards by AAA. In 2010, she was awarded First Prize in Watercolour ant won other 4 international awards from the American Art Awards. Twenty-two countries participated and the Jury was 25 top notch galleries in the USA.
Selected as Finalist many times at their International Juried Exhibition at Kent Art Gallery, New-York area, she became in 2001 the first Signature member elected outside the USA by the North East Watercolor Society, a national organization. Her works are part of collections in Museums in Québec and private/corporate collections in America, Europe, Asia. She also had a recognition as a “Master Painter of the World” by the famous International Artist Magazine in its Canadian section. A flower has her name: “Hémérocalle Lorraine Dietrich”, a floral hybrid by D. Harrisson, horticulturist. Her works are exhibited on a permanent basis in many art galleries. 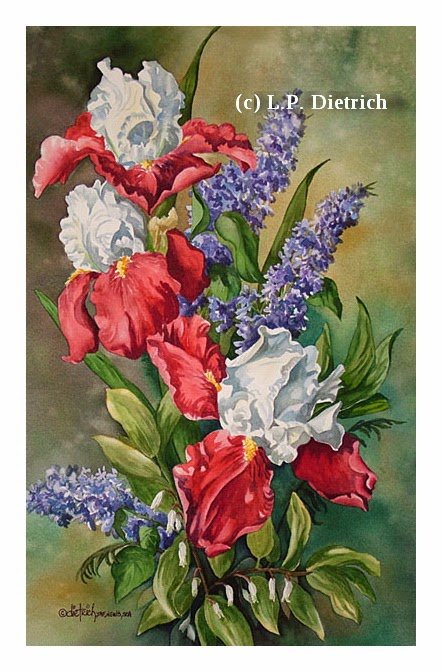